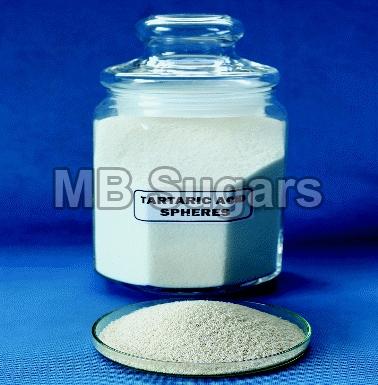 As a major Tartaric Acid Pellets Manufacturer, our products are designed to have better covering and layering qualities, resulting in more consistent product features and a better dissolving profile in sustained-release pellet formulations.

Tartaric acid is a benign and non-irritant substance that is frequently utilised in drug products with bicarbonates as the acid element of fizzy granules, powders, and tablets. As Tartaric Acid Pellets Exporter from India, our product is also utilised in the production of drinks, confectionery, food, and healthcare products.

TAP serves as a spherical starting core that is loaded with the medicinal component and then coated with a suitable polymer film to produce a sustained release profile.

Why a functioning beginning core rather than a neutral one? When a therapeutic material has inadequate solubility at pH values found in the lower GIT, the pH-dependent dispersion of the drug component might be a significant obstacle to clear in prolonged-release preparations.